I started working at Data Interchange as an Office Administrator in 2012, after leaving primary school teaching; I will be five years with the company in July 2016. Data Interchange are a leading provider of EDI and e-business software with its heritage in the automotive industry, as we were born from Perkins Engines 30 years ago in 2016.

I started as an Office Administrator and have progressed through PA to the MD and PA to the Board to my current role, Executive Assistant to the Commercial Director. I have been asked to do everything from eBay a bugle to work strategically on the company’s vision!

I decided that where I added the biggest value to the business was “bringing the outside in”. We have some great programmers, some great account managers, but not many people in the business whose strengths lie in their ability to talk to people about our business, without too much technical detail or too much pitching! I have helped to expand the business’ horizons by being involved with a variety of different bodies in the logistics industries, such as Women in Logistics, a 3500-strong organisation that stands for engaging, connecting and inspiring women in the logistics industry and by being a regional CILT chair for Peterborough and Cambridgeshire. I also run the Peterborough PA Network and sit on the General Board of EPAA, a national PA association; this adds a different flavour to our business, allowing us to see how other businesses work from, for example, a CSR perspective and pinching their good ideas (it’s called knowledge sharing, I know!)!

In addition to the physical world, I am very active on Twitter, which, in itself has given me some great opportunities, from a photo shoot to keynote speaking at a trade show in London. Again, I can use the knowledge I learn here to go back into the business and say, “look what I have seen, look who I have met, these are the changes in our arena”.

In short, you have to be “in it to win it” – networking, both virtually and in person, has opened many doors. My biggest achievement that has been borne from using my spare time to get involved with our industry, and one of the biggest boosts to my personal brand, was winning the Multimodal Woman of the Year award from Women in Logistics last year. It was one of the things that helped me get my last promotion – although, to be clear, it wasn’t the winning of the award, it was the commitment to our industry and to my self-development that got me noticed. I got to meet a childhood hero, Simon Weston, and I got some self-confidence!

Having support, like I have from both my boss and from Ruth Waring, founder of Women in Logistics, and from many other people besides – notably Lynn, our Regional Office for CILT in the Eastern region – has ensured that not only have my “extra-curricular activities” been made possible, they have been made part of my job description.

A Douglas Adams quote – “I may not have gone where I intended to go, but I think I have ended up where I needed to be.” Four and a half years ago I was a rudderless ship on a fathomless sea. Now, I am where I want to be, working with our customers on a variety of projects, working with different branches of our business to expand my knowledge and working with groups both within and outside of logistics to add value to both the business and to me. 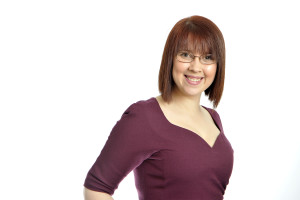