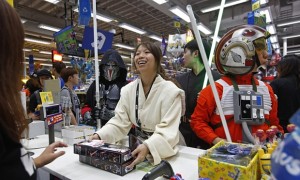 The Force that is the Star Wars film empire is not busy fighting The Sith but is instead embroiled in an 18 hour live unveiling of merchandise streamed on YouTube.

Fans have been invited to give up the best part of a day to watch as toys from the Episode VII, Star Wars: The Force Awakens, are unboxed for their viewing pleasure.

It might be three months before the new film hits cinemas but Disney, which bought out the Lucasfilm franchise for $4bn, are apparently keen to cash in early on the new film with toys, collectables, books and other merchandise going on sale tomorrow in what has been dubbed “Force Friday”.

The contribution to the UK economy of toy merchandising is in the region of £3.28bn.

With the worldwide launch of the new film scheduled for December 18th the new range of Star Wars toys may well be top of many Christmas lists this year.